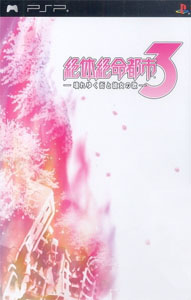 To view this FAQ properly, make sure that your browser is set to UTF-8 and is able to display Japanese characters.Use Ctrl+F and enter a keyword to jump to the desired section or follow the links.

For the people who can actually understand what's going on in this game, spoilers will be plentiful in majority of the sections. Consider this your first and final warning. If the plot gets ruined for you in any way while reading this thing, you have no one to blame but YOURSELF.

The first two games were released for the PS2 and repackaged by Agetec as "Disaster Report" and "Raw Danger" upon NA/EUR release.

Zettai Zetsumei Toshi 3 was released in Japan on April 23 2009 for the PSP and has (thankfully) seen no NA/EUR release date ever since. The limited edition pack includes a headset with retractable wires, bearing one elemental motif on each earpiece.

The subtitle "Kowareyuku Machi To Kanojo No Uta" translates to "A Town Approaching Ruin And Her Song" .

ZZT3's "PSP The Best" version was released on Feb 3, 2011. An Asian edition also came out with a bilingual (Chinese & English) gameplay mechanic translation sheet, but the in-game language is still Japanese.

Zettai Zetsumei Toshi 4: Summer Memories was supposed to be released April 30, 2011 on the PS3, but was canceled because of the Touhoku Earthquake. Around 8 years later, it has become slated for release on the PS4 and Nintendo Switch.

Kazuma Kujo, the man responsible for the series has since left Irem and formed his own company, Granzella. Said company now owns the rights to the ZZT franchise.

A. TITLE SCREEN
--NEW GAME
--LOAD GAME
--DISASTER MANUAL (Text with advice for instances of real-life disaster compiled by J-DINS. Individual manuals are unlocked during the course of the game, but some have to be located.)
--OPTIONS
--MULTIPLAY (Ad-Hoc play for up to 4 people)

*CREATE TAB
--COMBINE: Shows you what items can be combined to create makeshift equipment.
--DISMANTLE: Restores base items used to create said equipment. Cannot be done when inventory is full.

Their initial background is similar: Both are on the bus to go to Central Island, excited to start a new life in the bustling megalopolis as an incoming college student. Their overall personality is a blank slate, customizable via the choices you make in the game.

You can also change their names from the default ones using the PSP's on-screen keyboard. You will lose the event audio from the names when you do so, but that's only a trifle detail.

**本条 咲 (Saki Honjou): A nurse who was about to leave Central Island to pursue her dream of becoming a singer. The quake traps her underneath the car she was driving.
**羽月 彩水 (Ayami Hazuki): A shy high school girl, daughter of one of the figures behind the development of Central Island. She finds herself stranded at the corner of her room in the Hotel High Urban during the quake when parts of the upper floors crumbled to the ground.

===3.2 OTHER CHARACTERS===
**森田 信輝 (Nobuteru Morita): CEO of the Morita Group who gets caught in the earthquake. Arrogant and ruthless, he initially escapes the tunnel unharmed but is later killed in his own company building.
**羽月 大悟 (Daigo Hazuki): President of Hazuki Development Corp., the company behind the creation of Central Island.
**氷川 慶介 (Keisuke Hikawa): A young man who introduces himself as a detective chasing a lead in Central Island regarding the rumored suicide.
**石沢 要一 (Youichi Ishizawa): A geologist who years ago found structural problems in the Central Island development site, but was forced to keep his findings quiet.
**本多 涼子 (Ryoko Honda): Reporter. Despite being caught up in the disaster, she still goes around to collect information about Central Island, both regarding the suicide case and the earthquake.
**比嘉 夏海 (Natsumi Higa): A young teacher in one of Central Island's local high schools.
**院長 (Hospital Director): Saki's former superior in the Central Island City Hospital. Opted to stay with his terminally ill wife instead of evacuating when the quake ocurred.
**石沢 景子 (Keiko Ishizawa): Youichi's daughter, worked as a secretary for Hazuki Construction Corp and was Hikawa's fiancee. Her sudden death was released to the press as a suicide, but...

When your HP hits very low levels, the background is enveloped by a pinkish filter and your character enters a near-death state. All movements become severely hampered. When it goes down to 0, I'm sure you know what happens next... To recover, use First Aid kits, food and the benches.

===4.2 STRESS===
As you go around the ruined Central Island, you will constantly have to deal with a variety of stressors. The ST meter under your health bar lets you keep track of the amount of stress your character is experiencing.

The rate is determined by your proficiency in conquering obstacles and established personality. At a certain point, Stress starts to affect your health, and upon hitting maximum renders your character in the same state of near-death mentioned in the prior section.

Factors that quickly increase stress rate are as follows:
*Escaping an active disaster area.
*Smoke/gas inhalation.
*Standing close to a fire. (but not close enough to incur HP damage)
*Hanging on a ledge. this happens when you try to make a jump with the other end barely past your average distance or if you are about to fall from a high place while walking.
*Witnessing traumatic/panic-inducing scenes (mainly event or choice-driven ones).
*Being caught in the rain without an umbrella (I'm not kidding).

On the flip side, you can lower stress by doing the following:
*Taking medicine, food and drinks.
*Being nice to Saki and Ayami.
*Being mean to Saki and Ayami (at the expense of their respective endings).
*Sitting on benches.
*Witnessing calming/heartwarming events.
*Listening to Saki's song (only accessible during certain parts of the game).
*Getting a handkerchief from a special someone and sniffing it. I know, doing that makes you look like a creepy pervert, but it helps. BTW, this can only be done at the very last part of the game.

===4.3 INVENTORY WEIGHT===
The backpack you currently have has a weight limit indicated by blocks on the inventory screen. Every item you obtain (excluding costumes and periodicals) adds a certain number of fill colors (Blue = 1 Full Block, Red = Half-full Block) to the bag's blocks. You cannot pick up any more if all the blocks are full.

Until you can get a bigger one, item management is key. Since the game discourages backtracking, you might think that you need all the healing items you find; but if you play the game well, you might not even use them at all. Remember Lao Tzu's saying: "He who knows that enough is enough will always have enough".

Combining certain items into functional tools also reduces inventory weight, so do it whenever possible. Besides, you can dismantle them later once your capacity increases.

Contrary to popular belief, the backpack's full capacity weight does NOT hamper your movement in the least. You can try it for yourself.

===4.3 PERSONALITY TYPES===
Depending on your dialogue choices, your main character can adopt one of three personality traits which affects stress rate and recovery. The kind you become can be seen in your subscreen menu. After establishing your initial personality at the start, you are allowed to change types for the next two days of the game, so if you're having trouble beating the game as one type, simply alter your choices to fit another one. On the flip side, keep your choices consistent for your current type if you don't want to change it.

*情熱型 (Passionate Type) - Acts on feelings rather than thoughts. A Passionate type is somewhat prone to stress, but can recover from it at the same rate.

*臆病型 (Nervous Type) - Ostensibly a coward, but is actually cautious and practical to the extent of being scheming. Nervous types are severely weak to stress, and can only slightly recover from it.


===4.4 RELATIONSHIPS===
Aside from personality types, your character's relationship with Saki and Ayami can potentially develop depending on the dialogue choices you make. If you're nice to them, you'll get something special that facilitates their respective endings. But if you act like a total jerk, you'll get your just desserts later...

You'll know that your relationship with either character has reached a very high point when they ask you to address them on a first-name basis at the end of the second day. Also, when you're on the bench with Saki and your relationship level with her is high enough, she'll sit closer and cast her gaze on your direction. On the flip side, if you've been doing nothing but antagonizing her, Saki sits farther apart from you and will be looking away.

So unless you're intentionally gunning for the major bad endings, there's no reason not to make nice with the two girls. Just be clear on whose ending you want, and keep making good choices towards activating and maintaining her flag up to the last scene.

>>>TO DAY 1 WALKTHROUGH
Posted by おしゃれ刑事

おしゃれ刑事
OshareKeiji is a self-styled anime and game otaku. This blog will feature his original JP game guides for the Japanese-impaired, where they are not hampered by the the antiquated limitations of plain-text format.

Game titles and content are copyright of their respective companies.

All guide content is copyrighted to the author. (and co-authors for joint guides) These guides should not be reprinted in any commercial media nor reposted in other sites without proper credit.

Go to my main blog and use the shoutbox there.

Please put a name in when you do. I summarily delete "Guest" entries.